Institute of Gerontology researcher gets top citation honors for 2006 publication 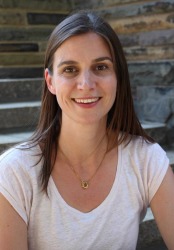 DETROIT - Jessica Damoiseaux, Ph.D., a cognitive neuroscientist at the Institute of Gerontology at Wayne State University, is first author of a journal article deemed a "classic" due to its high number of citations in the past 10 years. The paper has been cited 2,600 times, putting it at the top of Google Scholar neurology papers. Papers become classics when they present new research and their significance over the past decade has stood the test of time, according to Google Scholar.

Damoiseaux's paper, "Consistent Resting State Networks across Healthy Subjects," was published in the Proceedings of the National Academy of Sciences in September 2006. It was one of the first papers to study resting state functional connectivity and show the existence of networks across subjects and MRI scan sessions. "Back in 2005 when we did the research, analysis of resting state functional connectivity was very new," Damoiseaux said. "There was a lot of discussion about whether this was a substantive finding or just noise. Our work showed that resting state networks are real and consistent. We identified 10 of them in the brain."

Resting state functional MRI (fMRI) measures regional interactions in the brain when it is not engaged in an explicit task. The relationship between these regions is called functional connectivity. Damoiseaux's study identified 10 consistent resting patterns, across multiple subjects at multiple time points. She was in graduate school in the Netherlands at the time and studying resting state networks was a new approach. "We wanted to know how consistent these were," she said. "This hadn't been done yet."

Timing helped. At that time, the field then was new and hotly debated. When Damoiseaux presented her research at the Human Brain Mapping Conference in 2005, hers was one of about five posters on resting state connectivity. "Now the majority of researchers seem to present on that," she said. "We got in early."

The success of Damoiseaux's research and publication in a highly prestigious journal were heady achievements for a graduate student. "My fellow grad students teased me that I'd already peaked, reached a pinnacle I'd never reach again. Such a high bar," she said. Today, she takes a more applied approach to her research, studying older adults for early, pre-symptomatic predictors of Alzheimer's disease. Her publications continue to have impact. Damoiseaux' April 2012 "Functional Connectivity Tracks Clinical Deterioration in Alzheimer's Disease" was recently named the most cited article in the Neurobiology of Aging journal.

The Institute of Gerontology researches aging, educates students in gerontology, and presents programs on aging issues relevant to professionals, caregivers and older adults in the community (iog.wayne.edu). The institute is part of the Division of Research at Wayne State University, one of the nation's pre-eminent public research institutions in an urban setting. For more about research at Wayne State University, visit research.wayne.edu.