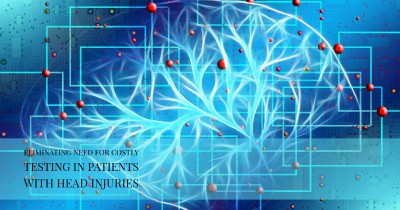 DETROIT - Research conducted at the Wayne State University School of Medicine has helped confirm the effectiveness of a blood biomarker that can indicate if patients with a head injury can avoid a costly CT scan because the blood test results indicate no traumatic brain injury (TBI).

The findings, published online in The Lancet Neurology on July 24, validated the use of a diagnostic blood test developed by Banyan Biomarkers Inc. to rule out the need for a head CT scan in patients 18 years and older with suspected TBI. The results support the potential clinical role of the biomarker test to dramatically reduce the need to order CT scans of the head, cutting patient exposure to radiation and health care costs for unnecessary scans.

The multi-site study, "Serum GFAP and UCH-L1 in prediction of absence of intracranial injuries on head CT (ALERT-TBI): a multicenter observational study," indicated that the Banyan Brain Trauma Indicator, or Banyan BTIâ„¢, correctly identified 99.6 percent of patients who did not have a TBI on head CT scans in more than 1,900 adults presenting to emergency departments in the United States and Europe, said Robert Welch, M.D., M.S., the Brooks F. Bock, M.D., Endowed Professor of Emergency Medicine for Wayne State University.

"This study is exciting for a few reasons. This is the largest study of any biomarker for TBI that has been performed in the United States and provides robustness of the findings compared to many earlier smaller studies," Dr. Welch said. "Our results were the basis for the first FDA approved blood biomarker panel that will aid in the diagnosis and care of patients with mild TBI. To a certain degree, this has been a holy grail for quite some time."

"Once a commercially available product is released, I suspect these two biomarkers will become an important component of clinical care of patients with head injury and suspected TBI," he added.

Wayne State University was the top enrolling site in the multi-center study, he said.

The biomarkers, Ubiquitin Carboxy-terminal Hydrolase-L1 (UCH-L1) and Glial Fibrillary Acidic Protein (GFAP), are detected in the blood soon after a brain injury. In February, the U.S. Food and Drug Administration granted marketing authorization to Banyan Biomarkers for the commercialization of Banyan BTIâ„¢ to aid in the evaluation of patients with suspected TBIs. The Banyan BTI is the first and only biomarker that has been approved for use in TBI by the FDA.

The results demonstrate that the two blood-based brain biomarkers can predict the absence of intracranial injury and reduce unnecessary head CT scanning, thereby reducing radiation exposure and health care costs while improving patient care and emergency department efficiency, the study said. The biomarkers are especially useful in mild forms of TBI, such as concussions suffered during athletics.

An estimated 54 million to 60 million people worldwide sustain a TBI annually. In the United States, more than 2.5 million people are diagnosed with TBI each year, according to the U.S. Centers for Disease Control and Prevention, most of those concussions. CT scans of the head are the common diagnostic choices for such cases, contributing to the nearly 20 million head CT scans conducted annually in the U.S. that cost more than $76 billion each year.

The widespread use of head CT scans has been questioned because of the potential adverse effects of radiation exposure, unnecessary emergency department resource use and the cost of the scans. Clinical decision rules developed to reduce unnecessary head CT scans have had minimal effect.

The study's results suggest that as many as one-third of head CT scans performed in the acute setting for TBI can be avoided altogether. The clinical use of the GFAP and UCH-L1 biomarker test has the potential to reduce unnecessary head CT scans, and avoid their attendant radiation exposure and costs, Dr. Welch said.