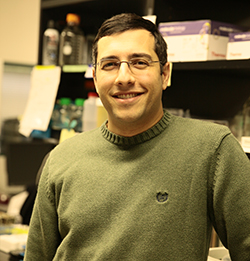 DETROIT - A research team from Wayne State University has received a $1.85 million grant from the National Institute of General Medical Sciences of the National Institutes of Health for the project "Mechanisms of Non-Shine-Dalgarno Translation Initiation." The project will be led by Jared Schrader, Ph.D., assistant professor of biological sciences in Wayne State's College of Liberal Arts and Sciences.

Antibiotics work in different ways, but some can attack the very basic process of making new proteins in bacterial cells. These antibiotics block translation, in which the cell reads information from a messenger RNA (mRNA) molecule, which it uses to build a protein. When antibiotics are taken, the antibiotic molecule will latch onto key translation molecules inside of bacterial cells and stall them so that proteins cannot be made, ultimately stopping the bacteria from functioning and causing it to eventually die.

In the model bacterium E. coli, it was discovered that a special sequence of RNA called a Shine-Dalgarno sequence is needed to dictate the ribosome on where to start decoding an mRNA into a protein.

The Shine-Dalgarno sequence is a ribosomal binding site in bacterial and archaeal messenger RNA. The RNA sequence helps recruit the ribosome to the mRNA to initiate protein synthesis by aligning the ribosome with the start codon.

"While the Shine-Dalgarno model is widely accepted as textbook knowledge for bacterial translation, genome sequencing of tens of thousands of bacterial species has revealed that many organisms, including many pathogens, lack Shine-Dalgarno sites in most of their mRNAs," said Schrader. "Without a Shine-Dalgarno, it's unclear how these bacteria are able to make the proteins encoded in their genomes."

Schrader and his collaborators aim to determine the molecular mechanisms of non-Shine-Dalgarno initiation in hopes to identify novel antibiotic targets effective against these groups of pathogens.

"Through our work, we have an exciting downstream possibility that what we uncover will allow us to design antibiotics that specifically target non-Shine-Dalgarno translation machinery," said Schrader. "This will open the door to new antibiotic treatments where bacteria have become difficult to treat or even resistant to antibiotics currently available."

The grant number for this National Institutes of Health project is GM124733.