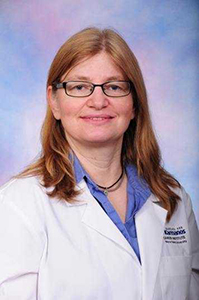 DETROIT - Susan G. Komen, the world's leading breast cancer organization, announced that it has awarded $30.7 million for 98 research grants, including one to Karin List, Ph.D., associate professor of pharmacology and oncology in the School of Medicine at Wayne State University and the Barbara Ann Karmanos Cancer Institute.

IBC is characterized by rapid progression, local and distant metastases, younger age of onset, and high occurrence in African American women. Additional complications of IBC include the fact that 20 to 40 percent of cases are triple-negative breast cancers, which excludes hormone therapy and HER2 targeting as treatment options, all of which lead to a poor prognosis for IBC patients.

"Many breast tumors have elevated levels of proteases â€” protein-cutting enzymes that help the tumor invade tissue and spread to distant sites," said List. "These proteases can also activate growth factors that stimulate tumor growth." One protease that the List group has focused on, matriptase, is located on the surface of the cells that form the milk ducts in a normal breast. List and her collaborators have previously shown that this is often found at high levels in women with IBC.

List and her research team will test a new drug targeting matriptase and IBC in preclinical models. The drug, IN-1 â€” developed by  Eric Marsault, Ph.D. and his team at UniversitÃ© de Sherbrooke, Quebec, Canada â€” will be tested alone as a mono-drug, but also in conjunction with an FDA-approved drug, Cabozantinib, which directly inhibits the activity of c-Met.

"Using this strategy of a dual drug therapy helps to address the critical issue of potential mono-drug resistance by targeting both the c-Met proto-oncogene and the upstream activator of its ligand, HGF," added List. "Validation of matriptase as a new target and an alternative treatment approach for IBC, along with other types of breast cancer, may provide benefits to patients suffering from this devastating disease in the future."

Collaborators on this project include Julie Lang, M.D., at University of Southern California, Los Angeles, and Marsault. Katrina Studvent, chief development officer at the Barbara Ann Karmanos Cancer Institute and Maureen Keenan Meldrum, retired chair of the Susan G. Komen Detroit Race for the Cure and retired director of breast cancer special programs at Karmanos, serve as consultants on the project.