Research may lead to new treatments to prevent preterm birth 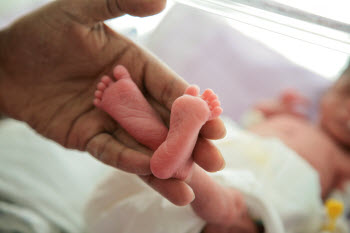 DETROIT - Preterm birth â€” birth before 37 weeks of pregnancy â€” affects up to one in every six births in the United States and many other countries. It is the number one cause of infant death and long-term illnesses and imposes heavy social and economic burdens. Although preterm birth is a complex condition, infection of the mother and ensuing inflammation in pregnancy are very common triggers.

In a recent study published in the premier biomedical research journal Nature Medicine, a team of researchers led by Wayne State University's Kang Chen, Ph.D., assistant professor of obstetrics and gynecology in the School of Medicine, discovered the critical function of a type of mother's immune cells â€” B lymphocytes â€” in resisting preterm birth triggered by inflammation.

According to Chen, B lymphocytes make antibodies to defend the body against infections, but scientists and clinicians have always thought these cells are rare or absent in the uterine lining and not important for pregnancy.

Chen's lab discovered that in late pregnancy, mothers' B lymphocytes not only reside in the uterine lining in both humans and mice, but also detect inflammation and uterine stress, which are major causes of preterm birth, and in turn, produce molecules â€” including one called PIBF1 â€” to suppress uterine inflammation and premature birth.

"This study not only reveals the long-neglected function of B lymphocytes in promoting healthy pregnancy, but also supports therapeutic approaches of using B lymphocyte-derived molecules â€” such as PIBF1 â€” to prevent or treat preterm birth," said Chen.

Chen's team has performed proof-of-concept and efficacy studies in animal models, and with the help of the Wayne State University's Technology Commercialization Office, filed a patent for this potential therapeutic approach.

"It is truly remarkable that Kang has independently convened and led a team of outstanding scientists to accomplish this original and impressive tour de force, especially considering the many challenges he has encountered in the process," said Chen's collaborators, who included scientists and clinicians from Wayne State University, Beaumont Hospital Dearborn, Yale University, Memorial Sloan-Kettering Cancer Center, Washington University in St. Louis and Icahn School of Medicine at Mount Sinai. The lead authors are Wayne State postdoctoral fellows Bihui Huang and Azure Faucette, who have both assumed independent positions in academia.

This study was supported by the Burroughs Wellcome Fund, the National Institute of Allergy and Infectious Diseases of the National Institutes of Health (U01AI95776 Young Investigator Award), the American Congress of Obstetricians and Gynecologists, the Wayne State University Perinatal Initiative, and Wayne State's Office of the Vice President for Research.